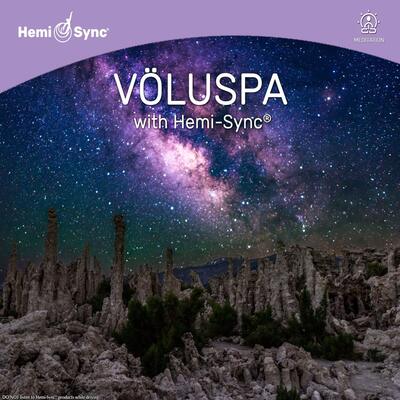 Völuspa is a fascinating creation myth – a powerful journey of death, destruction and renewal.

Narrated by Ralph Metzner and supported by a dramatic and potent soundtrack by Byron Metcalf (featuring Dashmesh Khalsa), this unique album, combined with Hemi-Sync® frequencies, is designed to take the listener on a personal exploration of the cycles and mysteries of death and rebirth that are ever present in the human psyche. Features two tracks; track 1 is Ralph Metzner’s reading of the poem, and track 2 is music only. Includes a companion booklet with an overview of the origins of the Völuspa poem, and the words to the poem.
Hemi-Sync® version engineered and mastered by Justin Cason. Executive producer Garrett Stevens.

Ralph Metzner (May 18, 1936 – March 14, 2019), was a German-born American psychologist, writer and researcher, who participated in psychedelic research at Harvard University in the early 1960s with Timothy Leary and Richard Alpert (later known as Ram Dass). Metzner was a psychotherapist, and Professor Emeritus of psychology at the California Institute of Integral Studies in San Francisco, where he was formerly the Academic Dean and Academic Vice-president. He received his Ph.D. in Psychology from Harvard.

Metzner was involved in consciousness research of psychedelics, yoga, meditation and shamanism for over 50 years. He was co-founder with his wife, Cathy Coleman, and President of the Green Earth Foundation, a non-profit educational organization devoted to healing and harmonizing the relationship between humans and the Earth. Metzner was featured in the 2006 film Entheogen: Awakening the Divine Within, a documentary about rediscovering an enchanted cosmos in the modern world.

He conducted workshops on consciousness transformation and alchemical divination, both nationally and internationally. He was also a poet and singer-songwriter and produced two CDs with Kit Walker: A spoken word CD ("Spirit Soundings," with music by Kit Walker) and one music CD of original songs ("Bardo Blues"). His books include The Well of Remembrance, The Unfolding Self, Green Psychology, and two edited collections on the science and the phenomenology of Ayahuasca and Teonanácatl, and a collection of reports about MDMA experiences. Metzner provided the foreword for Through the Gateway of the Heart: Accounts of Experiences with MDMA and Other Empathogenic Substances.