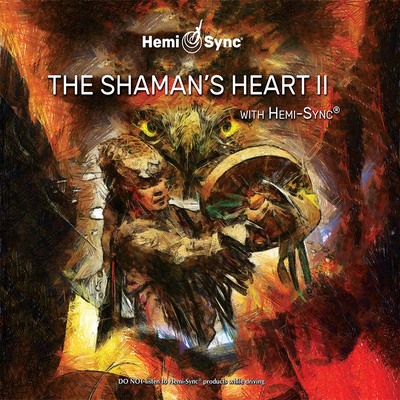 The Shaman’s Heart II with Hemi-Sync®

The Shaman’s Heart II with Hemi-Sync®

Enhance the heart’s capacities for love, compassion, and strength with this entrancing shamanic journey crafted by Byron Metcalf with Steve Roach.

This powerful and potent shamanic journey invites the listener to make full contact with their heart, their own inner wisdom, and non-physical helpers and guides to reveal, heal and transform the habitual patterns and blocks that inhibit and stifle growth and creativity. Byron Metcalf’s continuous heartbeat rhythm, medicine rattles, heart and soul activating trance drumming combines with Hemi-Sync® and Steve Roach’s sonic mastery for a rewarding and memorable Shamanic journey. Repeated use of this music in a personal ritual or ceremonial context will enhance the heart’s capacities for love, compassion, courage, power, and strength. Length: 71 minutes
Engineered and mastered by Kevin Cowan.

Why did you create The Shaman’s Heart II? What is different from the first album?

Byron Metcalf: I’ve had many requests over the years to create a “long form” shamanic journey CD – a journey that would not be interrupted by separate tracks or even separate tracks that seamlessly flow into each other (crossfading). The award-winning “The Shaman’s Heart w/Hemi Sync” contains 7 tracks and is based on subdivisions of the “classic” shamanic journey tempo of 220 beats per minute (55, 110, 220). The heartbeat rhythm is 55 bpm…read more

“With a continuous heartbeat rhythm, medicine rattles, cosmic keyboards and trance drumming, The Shaman’s Heart II—especially heard through headphones—is a transcendental experience, like dropping into a ceremonial sweat lodge in your own private space! This Hemi-Sync® programmed recording leads you on a shamanic journey, visceral and multi-dimensional, to bring you in full contact with your heart and inner wisdom. It also helps heal and transform habitual patterns and blocks that stifle growth and creativity. Repeated use may enhance your heart’s capacities for compassion, love, courage, power and strength. With or without headphones, this single-track album is perfect for rituals and ceremonies, and great for trance dancing too!” —Light of Consciousness, Winter 2014