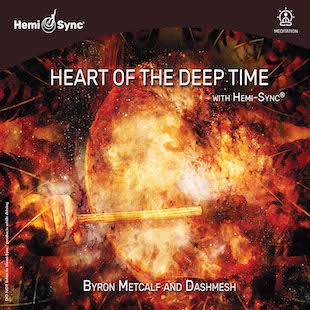 Heart of the Deep Time with Hemi-Sync®

Heart of the Deep Time with Hemi-Sync®

A psychoactive sonic dreamscape that beckons the listener to explore the depths of the Primordial Source.

Combining Byron Metcalf’s steady pulse of shaman drums and aboriginal percussion, the masterful didgeridoo of Dashmesh, and featuring the heart-centered synths of Frore (Paul Casper), this psychoactive sonic dreamscape will help you experience the known and unknown, a place of transformation. Hemi-Sync® frequencies assist in reaching pure awareness, calling you to the Great Mystery and beyond as you explore infinite possibilities and the depths of Primordial Source. Designed for uninterrupted listening, this music is ideal for journeying, deep meditation, inspired movement, and entheogenic exploration. Length: 62 minutes.

Dashmesh is a musician, producer, and philosopher who has worked with internationally renowned artists Bill Laswell, Byron Metcalf, Steve Roach, Toshinori Kondo, along with many others.

Dashmesh has studied music traditions from around the world such as Indian Tabla, Australian aboriginal Didgeridoo, Japanese Taiko drumming, and West African Djembe. He has blended styles of music including tribal, electronica, ambient, hip-hop, and jazz, thus defying traditional notions of discreet genres and styles.

Dash's music is informed by the need to create a healthy relationship between technology and nature, unite the ancient with the modern and bridge the difference between cultures to create more harmony where it may not have existed otherwise.

Copyright © 2022 by Interstate Industries, Inc. d/b/a Hemi-Sync®
Hemi-Sync.com®
Be the first to review “Heart of the Deep Time with Hemi-Sync®” Cancel reply