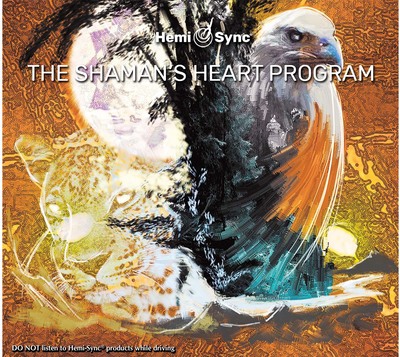 The Shaman’s Heart Program: The Path of Authentic Power, Purpose and Presence

The Shaman’s Heart Program: The Path of Authentic Power, Purpose and Presence

Learn to live from a heart-centered and soul-based perspective with this unique and powerful combination of shamanic practice, ancient wisdom, various methods of spiritual growth, and Hemi-Sync®.

Dr. Byron Metcalf has created a comprehensive program to help you fully develop your authentic power, purpose and presence by exploring and developing the heart from a shamanic and transpersonal perspective. This program consists of six verbally guided exercises, a special version of Metcalf’s award-winning Metamusic® title, The Shaman’s Heart with Hemi-Sync®, and a comprehensive guidance manual.

The Shaman’s Heart Program: The Power of Authentic Power, Purpose and Presence

Byron Metcalf is a drummer, percussionist, recording artist, and record producer. With over 40 years as a professional musician, he has performed on gold and platinum albums in the pop and country fields and in recent years has been experimenting with the use of drums, percussion, and other sounds to induce non-ordinary (altered) states of consciousness in both ceremonial and therapeutic contexts.

Byron's 1998 CD release Helpers, Guides & Allies continues to receive enthusiastic reviews in the shamanic, trance dance, and therapeutic communities, and was rated #4 in Backroads Music's 1998 “Best of Year” selections in the World Music category. Byron collaborated with award winning recording artist and sonic innovator Steve Roach on the critically acclaimed 2-disc epic The Serpent’s Lair (Projekt Records, Sept. 2000). Not Without Risk was Byron's second solo project. Wachuma's Wave (Spotted Peccary, 2003), a collaboration with German artist Mark Seelig (with Steve Roach), was chosen by Backroads Music as the #1 Release of 2003 in all categories. The Shaman's Heart with Hemi-Sync® (Monroe Products) was the winner of the COVR 2006 Visionary Award for "Best Inner Space/Mediation/Healing CD." This prestigious honor is considered on par with the Grammy Award within the Visionary/Healing Arts industry.

Byron recently retired from his professional counseling practice of over 20 years to devote his full energies to HoloShamanic Strategies, LLC, and its training program development, and also to allow more time in his recording studio.

Since 1988, Byron has focused his musical talents toward the healing arts, creating musical sequences for Holotropic Breathwork workshops, and facilitating men’s workshops and shamanic drumming circles and ceremonies. During the past decade, Byron has been producing solo CD projects and collaborating with other artists including Steve Roach, Mark Seelig, with Ron Oates, Jack Coddington, and several other musical guests.

In 2005, Byron teamed up with Monroe Products to produce a Metamusic® version of Byron’s critically acclaimed The Shaman’s Heart (with Steve Roach) which includes Monroe’s Hemi-Sync® technology embedded in the music tracks. Monroe has also released a Metamusic version of Byron’s second solo project Not Without Risk (re-sequenced and re-titled as Spirit Gathering) in late 2006, as well as Wachuma’s Wave (re-titled Deep Time Dreaming) in 2007.

His latest project with Monroe, The Shaman’s Heart Program: The Path of Authentic Power, Purpose and Presence is the first-ever comprehensive home-learning program for developing one’s full capacity for soul-based and heart-centered living.