Musings of a Hemi-Sync® Explorer – Story and Separation 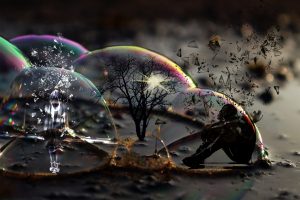 Recently it came to my attention that my fancy toothbrush has a built-in timer set for two minutes. This may not come as news to many of you, but for me, it explains why my visits to the dental hygienist have elicited more involuntary utterances than is probably necessary. As a side note, I’m apparently very bad at gauging how long two minutes is on my own. When it comes to my teeth, perhaps because I’ve been fortunate to have very few cavities over the years, I seem to view their maintenance as an annoying inconvenience. It’s as if they are a discrete masticatory enterprise whose welfare is somehow separate and apart from my overall health, wellbeing and happiness. “Gingivitis you say? Sucks for those teeth!”

This is obviously absurd, but I bring it up because the illusion of separation is so pervasive, yet we rarely consciously perceive it, let alone give voice to it. While we may be cognizant of our allies and perceived enemies (politically, philosophically, ideologically, competitively), especially if we’re on social media, we’re seldom aware of the subtler divisions that separate us from life, the world at large, and even aspects of ourselves, including our teeth.

We create the illusion of separation by telling stories about ourselves, such as “I’m a spiritual person.” As soon as we do that, there is a gap between needing to be seen for what we perceive we are and what we actually are. We aren’t being completely ourselves. We are not being where we are. We are not simply being. Once we’ve bought into the story, no matter how lofty it may seem, we are trapped. From there, it can be difficult to climb down because we’ve chosen a story that we’re identified with; a hill that must be defended and that we’re willing to die on. We’ve become the story instead of what we actually are.

Indeed, the illusion that we are discrete subjects separate from each other and from the world around us is written into our very language. “We must protect the environment,” as if it’s some other thing that isn’t inextricably linked with our own existence. When we do this with people, or groups of other people, it creates a remove that makes it much easier to simply protect me and mine; to maximize our own security. This distancing effect leads to indifference towards others, exploitation, cruelty and much worse. There is truly a spiritual dimension to the planetary crises we face. The way through this illusion is to first see it; to raise awareness of our own story. Once we do that, we – you and I – are powerful beyond imagining.

The latest offering from Suzanne Giesemann, in her Tools for Awakening series, cuts right through the illusion of the separate self by initiating a process of self-inquiry. You, Beyond Your Story, with music by Jim Oliver, invokes a sense of excitement and opens the mind to a greater reality filled with possibilities, allowing a deeply rooted sense of knowing to arise. Principal identity shifts from the narrow mind of you with a story to your true nature. With it comes an expanded state of wholeness. Be sure to check it out, and tell a friend so that awareness can spread far and wide.

Nimetu returned last month with his latest unconventional musical creation, entitled Enter the Hive, which is designed to help you easily enter altered states of consciousness, awareness and perception. Complex rhythms, melodies and other elements were downloaded from the “hyperspace,” blended with the sounds of insects, and interwoven with percussion partially inspired by the polyrhythms of the Baka people. This unique and powerful musical experience, created as a music entheogen and roadmap for meditation, is enhanced by Hemi-Sync® frequencies, allowing you to look beyond the surface and go deeper within.

For those of you who don’t know him, Jim Oliver is an Emmy Award-winning multi-keyboardist who creates transformational healing music infused with Harmonies of Light – a unique lighting system that renders harmonically/mathematically related colors, which shine like an aurora borealis, as Jim plays. Be sure to check out one of his live-streamed shows. We were very excited to hear that he had recently started collaborating with Suzanne and got a taste of what was possible with his background music on Getting to Know Your True Nature. That custom-composed track is now available, in its entirety, on track 1 of Illuminating Your True Nature. Track 2 is entitled Soul Infusion, which was created specifically as a continuation piece, to hold you in that space of true nature and allow for a deepening of the experience.

Suresh Ramaswamy is a transformational teacher and award-winning author of the book, Just Be. His Hemi-Sync® album, Tasting Infinity, provides listeners with the opportunity to experience directly what he has previously only written about it. You’ll be invited to raise your vibration and facilitate quantum shifts in your consciousness to perceive the vast nature of your being. Suresh is the real deal, and he reminds me of some of the most pre-eminent teachers around before they were “discovered” and became mainstream.

Tasting Infinity is newly available on our subscription service this month. We’ve also added Sleep and Concentration brainwave frequencies to the mixer, so please experiment with combining those and whatever ambient or nature sounds you prefer to create your ideal custom Hemi-Sync®.

Have you ever felt like you were in a toxic relationship, or engaged in negative self-talk, that you just could not find your way out of? Awaken Your Natural Intelligence by Dr. Laura Greenwood will guide you step-by-step through a process that frees you from harmful emotional entanglements in relationships and conflicts. You can overcome relationship failures and remain peaceful when others (or your own inner critic) seem to be blaming, shaming, criticizing, grasping or being indifferent toward you. Through an ancient Buddhist investigative questioning and listening method, you can connect with your own intuitive “knowing.”

I’ve had a number of people ask me about ongoing support for those who have completed introductory to intermediate Hemi-Sync® coursework. As a result, I’ve decided to experiment with offering a regular online two-hour workshop for graduates of our Explorers Wanted® course. If you have not completed the pre-requisite, but think you are prepared and ready, you’re welcome to register and participate. The general idea though is that you are comfortable with the material contained in at least the first two Waves of Gateway Experience®. It’s called Continuing Your Own Journey, and our first gathering will be on Sunday September 19th at 11AM Pacific time. We’ll be returning to F12 to specifically work with the layers of conditioning described in the opening paragraphs of this letter. The format will be similar to some of the Zoom groups we’ve hosted in the past, but we will limit the number of participants to allow for sharing and some individual work.

Back in March, we released Journey Into Your Heart, an uplifting and healing musical voyage to the center of your soul. This piece was created by Barry Goldstein from the musical score which served as the backdrop for a guided meditation by intuitive guide Lee Harris. Due to scheduling conflicts, Lee, Barry and I weren’t able to sit down and talk about it until recently. It was worth the wait though, so please check out Episode 29 of the Hemi-Sync Podcast: Accessing Heart Space with Lee Harris and Barry Goldstein. For those who don’t know, Lee channels a group called “the Zs”; don’t miss a special message around the 23-minute mark.

See you in Home or along the way,

Adventure into the Self