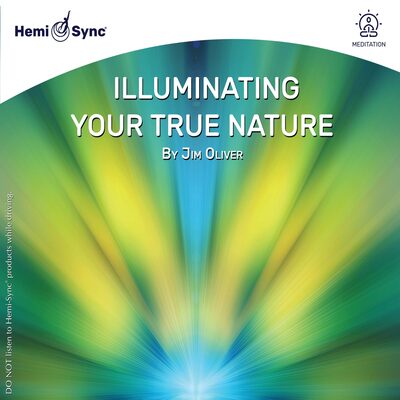 Delight in the essence of your true nature with this beautiful transformative music from Jim Oliver.

Emmy award winning multi-keyboardist Jim Oliver creates transformational healing music infused with Harmonies of Light—a one-of-a-kind lighting system that as Jim plays live music, the harmonically/mathematically related colors shine like aurora borealis. This offers a profound and expanded place for healing and self-awareness with high coherence and full integration with Your True Self.

The first track, Illuminating Your True Nature, is the custom-composed soundtrack to Suzanne Giesemann’s Getting to Know Your True Nature. The second track, Soul Infusion, was created specifically as a continuation, to hold you in that space and allow for a deepening of the experience. Hemi-Sync® frequencies assist in moving you into an expanded state of awareness. Track 1 is 24 minutes; Track 2 is 26 minutes.
Engineered and mastered by Kevin Cowan and Justin Cason.

Another title feature the music of Jim Oliver is You, Beyond Your Story by Suzanne Giesemann.

Jim is an Emmy Award winning musician, dynamic presenter, accomplished musician and composer of more than 3500 hours of transformational healing music. Jim began his lifelong musical journey at age 5 when he took his first piano lesson. Jim majored in classical organ at Hartt College of Music and then spent 8 years on the road performing in show rooms and fine dinner theaters across the US and Canada including Las Vegas and Lake Tahoe.

Since 1981 he intently studies and researches the beneficial power of music with a passion. Jim has played more than 70,000 hours of music in his lifetime so far. Jim brings forth unique combinations of sustained tones, melodic notes and chord progressions that speak to the soul and expand one’s consciousness. Jim’s music is a beautiful blend of art and science that is immediately deeply engaging and rejuvenating. Bruce Lipton calls Jim’s music “calming yet intellectually energizing.”

Jim is passionate about helping people self-heal and experience transformation through the power of sound. His music invites the human spirit to remember how awesome and divine it truly is. Jim’s music can help to restore balance and harmony to the body, mind, spirit and emotions and it additionally integrates cellular healing and creates coherence in the field. Each person will have their own unique experience and you will immediately feel the transformative power of Jim’s music. Jim has recently developed Harmonies of Light – a unique, coordinated music and lighting system that “plays” the mathematically related and harmonized colors of the musical notes on his keyboards simultaneously as he plays the music. This offers an expanded, harmonized space for self-healing of body, mind, spirit and emotions. This offers coherence and full integration of Your True Self – True Freedom – True Liberation.

Jim's beautiful and soulful music has been found to encourage self-healing for people from all over the world. Jim presented a top-rated 12 show series called Music Meditations and Inner Journeys on the World Puja Network. He has played live music at the United Nations with Croatian healer Braco and his music touches the hearts of people globally. He has created music live and recorded with and for Kenji Kumara, Pulitzer Prize nominee John Bradshaw, Brugh Joy and many others. His unique Live Streaming Music and Light Events attract thousands of people from all over the world. Jim is a popular radio and tele summit guest on shows with Lisa Garr, Adoley Odunton, Debra Poneman, Kristen Howe, Daniel Gutierrez, Cari Murphy, Sheila Gale, John Burgos, Brenda Pearce, Shefali Burns, Jacklyn Johnston, Judy Anderson, Moncef Afkir and many others. Jim’s special gift is to play spontaneous live music from his extremely wellequipped studio, based on the energy and focus of the group present and those that will listen in the future. This is a totally unique and profound experience for the participants.

Provided live music for The Shift Expo via live streaming from his studio.

The Light of Integration Winner of the 2013 Best New Age Music Production at the New Mexico Music Industry Awards.

Host of the extremely popular Music Meditations and Inner Journeys on World Puja Network 12 show series May thru October 2012. A top-rated show.

Provided live music for Marianne Williamson at a seminar in Santa Fe.

Composer, Musician, Producer & Distributor of more than 60 albums of original music that captures the versatility of Jim Oliver including: Harmonies of Light - Red Moon Eclipse, The Soul Series Music (5 CDs), The Freedom Series Music (6 CDs), The Light of Integration, Opening The Creative Flow Of You, Living In Heaven On Earth, The Frequencies Of Gratitude, Music Meditations and Inner Journeys (12 CDs), Nourishing Your Nervous System, Making Peace With Fear, Gazing Within, The Gift, Your True Self, Deep Calm, InTouch, Radiant Heart, Harmonic Resonance, Music For Relaxation, Stillness In Motion, The Crystal Star, Santa Fe MoonRise, Restive Woman, Universal Child, Love Dance, Sleepy Angels, One With the Eagle, and Healing Harmonies.

Commercial music tracks and soundtracks for various agencies and corporations including US West and Jones Intercable.

Soundtrack for Mother O’Keefe 60-minute film chronicling the life and art of Georgia O’Keefe. Selected for showing at the 2005 Santa Fe Film Festival and the 2005 Silver City Film Festival where it won an honorable mention.

Between Diet and Death 60 minute television show special that explored the dangers of eating disorders produced by WFTVABC, original soundtrack by Jim Oliver.

Emmy Award Nomination for soundtrack for Ships of the Sky. Sixty-minute television show about airships past and present, produced by WFTVABC, original soundtrack by Jim Oliver.

Inductee into The Television Hall of Fame NYC for his soundtrack to Life in the Stress Lane.

Family Baggage - Musical Score for Live Theater and Video Play about dysfunctional families. Jim scored the music for the live performances, played music live at theater performances in numerous locations around the US and wrote and performed the score for the two-hour long video.

Creator of more than 3,500 hours of therapeutic, transformational, self-healing music. Jim has played more than 70,000 hours of music in his lifetime so far.

Live music for Gazing Sessions with Braco from Croatia in Albuquerque, NM for 2 days.

Composer-in-Residence Sundance Institute, Jim was a composer and studio engineer in this pilot project with Robert Redford, 32 ballet dancers from Ballet West and 6 choreographers.

Live music for John Bradshaw Seminars – Pulitzer Prize nominee John Bradshaw is known for Bradshaw on: The Family and The Homecoming. Musical performer at numerous seminars.

Music is the Medicine of the Soul Seminars with Dr. Tony Rippo, MD. Presenter and performer.

Synphonics - Demonstrations and Lectures Founder of a process that uses specific frequencies and sound waveforms in conjunction with chord progressions, modulations, melodies harmonies and rhythms to support physical, mental and spiritual aspects of healing including seminars and performances at Arizona State University Music Therapy Department, and Desert Samaritan Hospital. More than 1000 custom sessions done for individuals.

American Massage Therapy Association National conventions - Exhibitor in Chicago, Philadelphia, Nashville, Park City, Albuquerque, and Palm Springs. Jim was a featured performer and presenter at many of the AMTA conventions.

Society and the Future of Computing Sponsored by Los Alamos National Laboratory, held in Durango, CO. Presenter and performer.

Conducted adult, teen, and youth choirs and played organ and piano for all church services.

The Jim Oliver Trio Nightclub tour of the Northeast U.S.

OTHER RECORDINGS AND ACTIVITIES