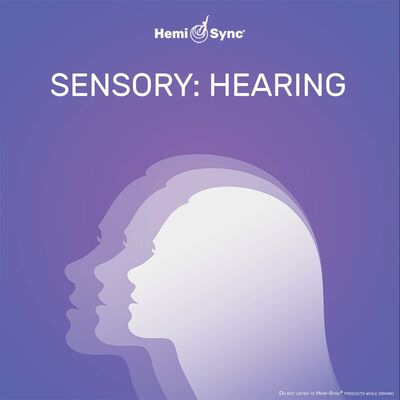 Amplify or decrease your sensitivity to sound. Learn a simple method you can use anytime, anywhere to control how you perceive sound. Use to compensate for hypersensitivity to sound or to hear low volume sounds more clearly. (Human Plus – verbally guided) 60 min.

Information reported by individuals and/or by professional practitioners about the use of Hemi-Sync® Products:

A doctor explained that he recommends Hemi-Sync to patients with varying degrees of hearing loss ranging from mild to total. They benefit from the tapes because the sound vibrations that make up the Hemi-Sync patterns are carried to the brain by the bones in the ear canal. It is not necessary to consciously ‘hear’ the Hemi-Sync.

“I gave Sensory: Hearing to a colleague who suffered from episodes of ringing in his ear followed by intense headache. The diagnosis had been degenerative nerve disease. At his next episode, he listened to the tape five times over a three-day period-all the symptoms stopped and he hasn’t had another episode for three months now. He’s very grateful for the relief and also for the relaxation from Hemi-Sync tapes.”

“Several friends plagued by tinnitus (ringing or buzzing in the ears) commented that after using Sensory: Hearing several times their tinnitus disappeared for long periods. When it came back, they only had to listen to the tape again.”

“This 91-year-old patient has a profound hearing loss in the left ear, and almost profound in the right ear. He wears hearing aids in both. While wearing a set of earphones that went over his hearing aids without whistling, he listened to H+ Circulation. During the Prep side he listened very intently and said back to me out loud everything that was being said on the tape. During the second side, I suggested that he see if he could go to sleep. He nodded off very soon.”

What is Human Plus®

Human Plus®, or H-Plus®is a means of utilizing the immense power of the subconscious to affect change in your life. Each H-Plus title contains precise combinations of Hemi-Sync®frequencies that gently draw you into an extraordinarily receptive, whole-brain state while establishing the Access Channel—the ultimate communication channel to all levels of awareness—mental, physical, and emotional. By design, the Access Channel is opened during each Function Exercise, allowing you to learn a different Function Command (short, verbal cue) ranging from controlling your appetite to increasing your energy. Once the Function Command has become encoded while the Access Channel is open you can then call upon or "activate” that Function at any time, on demand, in everyday life situations. The H-Plus series offers a different kind of pathway to new levels of freedom—to becoming Human Plus.

Human Plus teaches you to reproduce desired effects at will. Use any standard stereo system with headphones, or position yourself between speakers. Keep volume low so you just understand the words, and imagine yourself doing what the words describe. You may or may not fall asleep. There are no subliminal messages – the occasional verbal message at very low volume during a “sleep” period is simply a repetition of previously heard information. Listen to the PREP track (Track 1) once or twice, then listen to Track 2 once or twice. Start using the Function Command during appropriate daily activities. Continue listening to Track 2 for reinforcement until you feel confident using the Function Command. When using the Function Command, simply allow it to work. The effect may or may not be immediate. The more you use the Function Command, the more effective it becomes.
Learn More