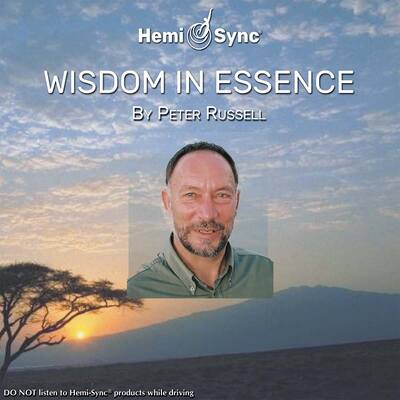 Tune in to your inner wisdom, your true essence, with this verbally guided meditation by futurist Peter Russell.

Peter Russell has been promoting the need for a spiritual rebirth if we are to survive the hurricane of change that lies ahead. Open to your innermost being and guidance to effectively and creatively deal with change as you experience Wisdom In Essence.  25 min.

Peter Russell is a fellow of the Institute of Noetic Sciences, The World Business Academy and The Findhorn Foundation, and an Honorary Member of The Club of Budapest.

At Cambridge University (UK), he studied mathematics and theoretical physics. Then, as he became increasingly fascinated by the mysteries of the human mind he changed to experimental psychology. Pursuing this interest, he traveled to India to study meditation and eastern philosophy, and on his return took up the first research post ever offered in Britain on the psychology of meditation.

He also has a post-graduate degree in computer science, and conducted there some of the early work on 3-dimensional displays, presaging by some twenty years the advent of virtual reality.

In the mid-seventies Peter Russell joined forces with Tony Buzan and helped teach "Mind Maps" and learning methods to a variety of international organizations and educational institutions.

His principal interest is the deeper, spiritual significance of the times we are passing through. He has written several books in this area -- The TM Technique, The Upanishads, The Brain Book, The Global Brain Awakens, The Creative Manager, The Consciousness Revolution, Waking Up in Time, and From Science to God.

As one of the more revolutionary futurists, Peter Russell has been a keynote speaker at many international conferences, in Europe, Japan and the USA. His multi-image shows and videos, The Global Brain and The White Hole in Time have won praise and prizes from around the world. In 1993 the environmental magazine Buzzworm voted Peter Russell "Eco-Philosopher Extraordinaire" of the year.