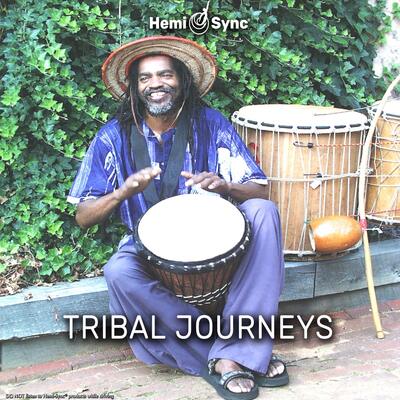 William Whitten’s spellbinding use of ancient African instruments, and the audio-guidance support of Hemi-Sync® transition you to a serene, otherworldly state where you are immersed in inspiring, dreamlike experiences. (57 min)

William Whitten is a native of Charlotte, North Carolina and moved to Charlottesville, Virginia at the age of 15 in 1966.

He began drumming in 1988. "Drumming makes me feel free. It brings us all together...we are all speaking the same language. Drumming is a universal thing...a way to connect. Everybody gets this...everybody can feel the drumming," he said.

For Tribal Journeys, he says "I played a lot of things and put it together...what you hear is what was created...it’s like the air, the sun..."

Whitten spent some time with the Department of Defense entertaining the troops, as part of an ensemble consisting of three drummers and three dancers, touring in Iceland, Norway, Scotland, Macedonia, England, Germany, The Netherlands, and West Africa.

He says his message is "Peace, love and respect for everybody. I leave the same message every time I play."

One of his early teachers/mentors told him "The only time I look down on anyone is to help them up." He said he was encouraged to use the phrase and pass it along to others. "It makes sense to me and I’m going to spread it," he said.

Whitten claims drumming for him is "therapeutic...it connects me with everything about me. It’s a centered process....connectedness."

He developed a center in Charlottesville "to bring people together and share what they have with one another...it’s family-oriented, free to children, a community place....a way for me to give back to the community."

He uses a Senegalese drumming technique, a particular style of hand-positioning. He makes and sells his own drums, of West African style. His lead drum is called a Djembe (Jim-bay) and his bass drum is a Djundjun (jun-jun). He also plays a number of other ethnic instruments, including the Berimbau, a one-string instrument from Angola.