The Power of Ritual: Shamanic Teachings for Human Evolution

Ark / The Power of Ritual: Shamanic Teachings for Human Evolution

Learn Shamanic Teachings for Personal and Human Evolution: An Online Apprenticeship in the Pachakuti Mesa Tradition

“When we surrender the need to figure it all out, and cultivate the ability to let it all in, then our earth walk becomes a sacred dance of healing service on the planet. More than the world needs saving, it needs loving.”
– don Oscar Miro-Quesada

In today’s industrialized world we are living out of balance with Mother Earth and the world around us. Our modern society is out of touch and no longer lives in harmony with nature. We are seeing an increase in companies and governments indiscriminately using up earth’s resources and contributing to deforestation, global warming, extinction of our animal kingdom, poisoning our waters, and so on. This is causing rampant destruction of cultural and biological diversity as well as profound physical and psychological illnesses in all of humanity.

Through the study and practice of shamanic ceremony and ritual, individuals learn to live in harmony with nature and Mother Earth and her children, the animal, plants, minerals and each other. As one becomes more mindful of how to live more in balance with the world around us, we begin to see a healing of individuals, mentally, physically, emotionally and spiritually. As individuals see themselves as whole, spiritual beings, they can then direct those energies of healing to Mother Earth, Pachamama. The ancient cultures and civilizations have much to teach us about how to live respectfully and in harmony with the Cosmic Universe that surrounds us in order for our species and our world to not only survive, but to evolve into a higher consciousness of global awareness. For a free discussion of don Oscar’s work and view of reality, be sure to check-out Ep. 25 of the Hemi-Sync® podcast.

This three-week, self-guided online workshop deepens participants’ experience of soul and spirit through ritual process. This apprenticeship workshop initiates participants into the Pachakuti Mesa, a powerful and sacred altar. Students learn how to create their own mesas and work with them for self-empowerment, transformation, and helping others. Students will also work with ancient breathing techniques and traditional ceremony for physical, emotional, mental and spiritual health, well-being, and transformation. More than an introduction to ritual practice, don Oscar will initiate you into a shamanic lineage and mystery tradition containing deep gnostic secrets.

Introduction
In this section, don Oscar will introduce the Pachakuti Mesa Tradition, which he founded, and his teaching lineage. He will then prepare you for your journey and help you to establish your own sacred space for practice.

Oscar Miro-Quesada Solevo is the originator of the Pachakuti Mesa Tradition of cross-cultural shamanism and visionary founder of The Heart of the Healer Alliance (THOTH). A respected kamasqa curandero and altomisayoq adept from Peru, don Oscar’s apprenticeship in northern coastal huachuma curanderismo and initiation into the southeastern Andean paqokuna shaman/priesthood, formally took place between the years 1969 and 1986.

An internationally-acclaimed shamanic teacher, healer and Earth honoring ritualist, don Oscar is also an OAS Fellow in Ethnopsychology, UN Invited Observer to the Permanent Forum on Indigenous Issues, and member of the Birth 2012 Welcoming Committee and the Evolutionary Leaders Circle convened, respectively, by Barbara Marx Hubbard and Deepak Chopra. He is co-author of Lessons in Courage: Peruvian Shamanic Wisdom for Everyday Life (Rainbow Ridge, 2013; with Bonnie Glass-Coffin).

Some of his other “mainstream” accomplishments include an A.S. degree in Life Sciences from Mitchell College, a B.A. in Psychology with a minor in Comparative Religion from Duke University, as well as an M.A. degree in Humanistic and Transpersonal Clinical Psychology from the State University of West Georgia.

Don Oscar has been facilitating experiential workshops and apprenticeship series of workshops that integrate millennial and contemporary healing practices and Earth-honoring ceremonial traditions with a focus on the creation of heartfelt sacred communities around the world since 1979. He has also been guiding exemplary cross-cultural shamanic apprenticeship expeditions to sacred sites of the world (with special emphasis on Peru and Bolivia) since 1986. His widely acclaimed ethnospiritual pilgrimages to ancestral lands are carefully designed to awaken a reverent awareness of Pachamama (“Earth Mother”) as a destined part of our human identity as an Earth-honoring global family. Aside from his currently established regional apprenticeship series in the U.S.A. and Europe, he has also been a popular teacher at prestigious international centers of leading-edge education such as Naropa, Shambhala Mountain Center, Interface, New York Open Center, Rowe, Frankfurter-Ring, Omega and Esalen, to name a few. His visionary work and unique travel programs have been featured on CNN, Univision, A&E and Discovery channels.

More important than all the credentials, however, is the fact that Oscar is a warm, loving human being who deeply cares about people and our planet and has an infectious belly laugh. He is a master at creating sacred community using the magic of joy, love and compassion as the strands that gently weave us together as a planetary family. His love for each student is exemplified by his keen attention to life-transforming ceremonial detail and group healing dynamics within each sacred hoop he serves. In essence, don Oscar’s life is best described as “transforming the world through sacred living,” as he lovingly carries forth a unique vision for pragmatic global spiritual regeneration born from the co-creation of sustainable earth-honoring sacred communities worldwide. Aho! Mitakuye Oyasin – All My Relations.

The Power of Ritual: Shamanic Teachings for Human Evolution

Welcome to this course! Please complete each session in order and, most importantly, have fun! 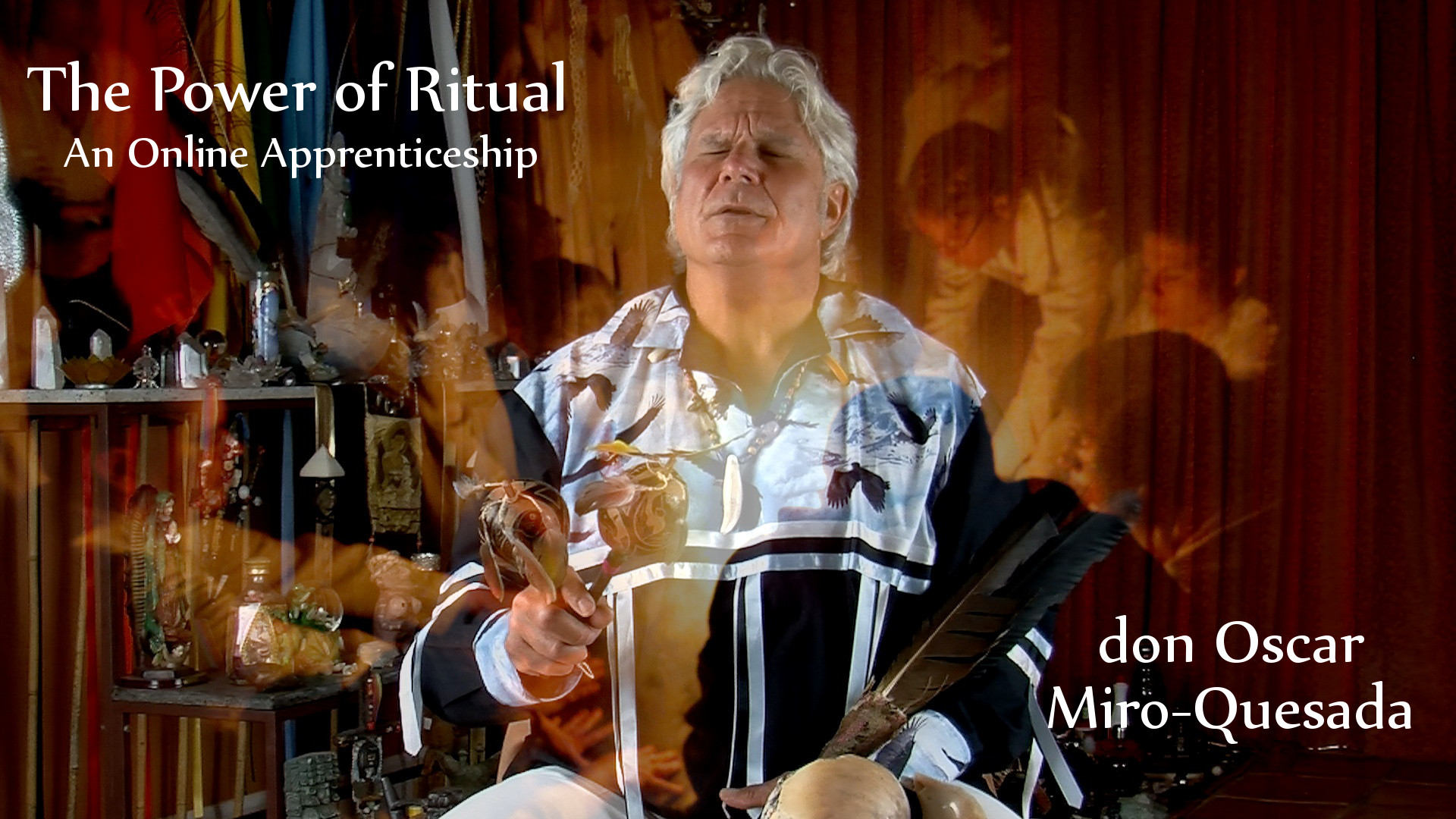 The Power of Ritual: About This Workshop

This is a self-guided course and so please note that don Oscar Miro-Quesada will not be available for answering questions in a discussion forum. This Online Course comes with nine downloadable MP3s, which do contain Hemi-Sync® audio guidance technology. If you need assistance, please contact us by email at interstate@hemi-sync.com.