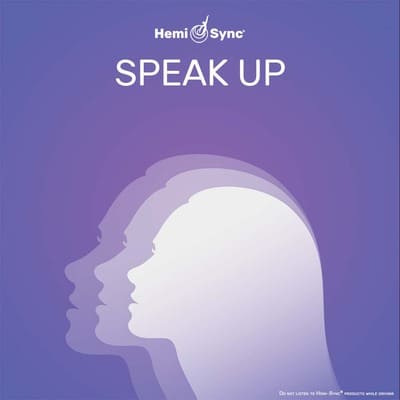 Address groups or individuals with ease and calmness. Speak Up teaches you a method to overcome shyness and enhance confidence when speaking in public. Use anytime to improve voice quality and achieve a better rapport with your audience in meetings, the classroom or social situations. (Human Plus – verbally guided) 60 min.

“I personally used to be a rather anxious, self conscious lecturer, but using ‘Speak Up’ just once was really a ‘break-through’. I am now very confident and relaxed. I lend it out to many students who have all found it very helpful to reduce anxieties over public speaking.”  —OSB, UK

What is Human Plus®

Human Plus®, or H-Plus®is a means of utilizing the immense power of the subconscious to affect change in your life. Each H-Plus title contains precise combinations of Hemi-Sync®frequencies that gently draw you into an extraordinarily receptive, whole-brain state while establishing the Access Channel—the ultimate communication channel to all levels of awareness—mental, physical, and emotional. By design, the Access Channel is opened during each Function Exercise, allowing you to learn a different Function Command (short, verbal cue) ranging from controlling your appetite to increasing your energy. Once the Function Command has become encoded while the Access Channel is open you can then call upon or "activate” that Function at any time, on demand, in everyday life situations. The H-Plus series offers a different kind of pathway to new levels of freedom—to becoming Human Plus.

Human Plus teaches you to reproduce desired effects at will. Use any standard stereo system with headphones, or position yourself between speakers. Keep volume low so you just understand the words, and imagine yourself doing what the words describe. You may or may not fall asleep. There are no subliminal messages – the occasional verbal message at very low volume during a “sleep” period is simply a repetition of previously heard information. Listen to the PREP track (Track 1) once or twice, then listen to Track 2 once or twice. Start using the Function Command during appropriate daily activities. Continue listening to Track 2 for reinforcement until you feel confident using the Function Command. When using the Function Command, simply allow it to work. The effect may or may not be immediate. The more you use the Function Command, the more effective it becomes.
Learn More