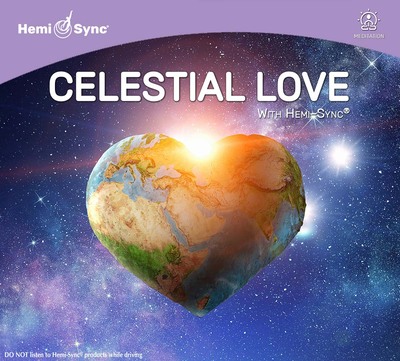 Experience the gentle, comforting and compassionate energies of those who watch over, love, and guide us.

In his third “Celestial” release, Jonn Serrie has compiled some of his most sublime ethereal music, creating a space for receiving unconditional love from the higher realms. Hemi-Sync® frequencies help move you into a highly expanded state of consciousness to connect with these other energy systems as you bask in the warmth and peace. Like a soothing hug embracing you, understand and know that you are loved beyond measure. Length: 53 minutes.
Executive producer Garrett Stevens. Engineered and mastered by Kevin Cowan.

Other titles by Jonn Serrie: Celestial Meditation, Celestial Space with Hemi-Sync®  and Maiden Voyage.
*Get all three “Celestial” albums at a special bundle price! Celestial Collection

Along with his extensive portfolio of recordings, with combined sales in the millions, Serrie’s list of achievements is diverse and esteemed. He was commissioned to compose the music for the world’s first interactive planetarium production with Star Wars creator George Lucas and the Hayden Planetarium in New York City. His music has been heard in hundreds of theaters worldwide including England, Germany, Sweden, Italy, Japan, China, Canada, South America, Australia, and many others. He composed the score for "Galaxies Across Space and Time,” an IMAX and Space Telescope Science Institute feature film about the discovery of deep field galaxies beyond the known universe. The film won first place in its category at the Large Format Academy Awards in Los Angeles. Jonn’s music is also featured in the new planetarium theater on the Queen Mary 2, one of the most advanced cruise ships in the world.

Jonn is a U.S. Air Force auxiliary mission pilot with advanced instrument and commercial ratings and holds the disaster relief Presidential Award with Valor for his flying in the Deep Water Horizon gulf oil spill.

He composed music for the hit Hollywood film, "What the Bleep Do We Know” starring Academy Award winner Marlee Matlin, and for David Carradine's Tai Chi series. Jonn is principal keyboardist for David Arkenstone's Symphonic Adventure, and was chosen to compose the music for Cirque De La Symphonie’s new corporate show, Cirque Universe.

Jonn performed at the anniversary celebration of Apollo 11 with Neil Armstrong in attendance, televised worldwide from Cape Canaveral, and premier performances at the Ansari X-Prize in St. Louis, the National Space Symposium in Colorado Springs, and the International Space Development Consortium in Washington, D.C.

He has performed before world leaders at the Carter Center in Atlanta, Georgia, and major corporate, astronomy and New Thought events around the country. He has opened for Dr. Wayne Dyer, Marianne Williamson, don Miguel Ruiz, Raymond Moody, Dr. Emoto, Michael Mirdad, Lynn Andrews, and others.

The music of Jonn Serrie embraces the expansiveness of space with the intelligent use of melody. He has made space understandable and the soul accessible.