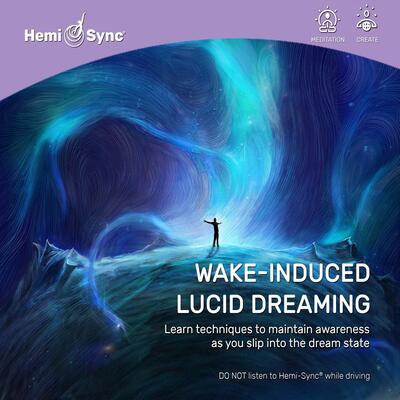 Learn techniques to maintain awareness as you slip into the dream state.

Learn to maintain and control your awareness as you pass through the stages of sleep, slipping into the dream state with conscious presence. This technique is known as Wake-Induced Lucid Dreaming (WILD), and with practice allows you to retain lucidity throughout and consciously dream at will. Luigi Sciambarella applies his years of experience as he guides you through this process as you learn to maximize your conscious dreaming potential. While dreams typically happen at night, this method will allow you to access these lucid states during meditation at any time of day. Features two tracks: Track 1 is an 8 minute introduction; Track 2 is the 38 minute guided exercise. Includes a handout titled, “Performing a Reality Check.”
Music by Christopher Lloyd Clarke, licensed by Enlightened Audio. Executive producer Garrett Stevens. Engineered and mastered by Kevin Cowan.

Another title by Luigi Sciambarella is Senses Initiated Lucid Dreaming.

Luigi Sciambarella’s journey into the exploration of consciousness began at an early age. This wasn’t deliberate, as answers to some of life’s biggest questions arrived before he had a chance to ask them! His early non-physical and lucid dreaming experiences left him with the knowledge that there is much more going on than what we can perceive through our physical senses.

As Luigi progressed through school and university, he became increasingly interested in understanding different aspects of mind and consciousness; which resulted in obtaining a BSc in Psychology. While the degree itself didn’t really answer any of his questions, it was during his time at university that he was involved in many personal experiments involving hypnosis and Hemi-Sync®. As in childhood, his experiences took off, and he had many OBEs and lucid dreams, maintaining a detailed journal ever since.

After being introduced to Bob Monroe's tools and research, he became very interested in the simplicity of using non-invasive technology to explore and expand human potential. After life-changing experiences during The Monroe Institute’s programs, Luigi decided to become an Outreach Trainer to help as many people as possible to experience more of their total selves, while enjoying this great opportunity for his own personal growth.

As a Residential Trainer, Luigi is dedicated to bringing more weekend and residential programs to the UK, as well as globally. He is an avid lucid dreamer, and together with trainer Thomas Hasenberger, designed the Lucid Dreaming Intensive program in 2013, which they have been conducting at TMI and globally.