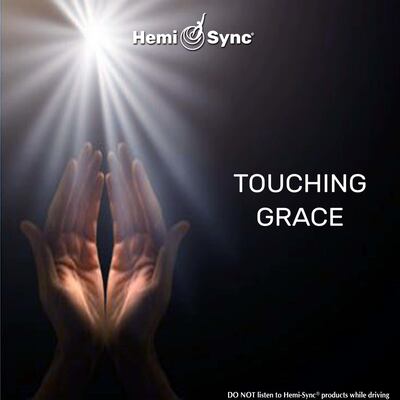 Connect with mystical realms with inspired music from Amoraea Dreamseed and Hemi-Sync®.

Touching Grace was originally released as Antahkarana in honor of the ancient healing and meditation symbol that has been used in Tibet and China for thousands of years. As a visual symbol, the Antahkarana was used in meditation to facilitate a connection to one’s Higher Self. Similarly, Touching Grace is intended to facilitate a sonic connection to one’s divine nature through music. Use for massage and energy healing work or for deep, experiential meditation. Instruments featured: flute, harp, percussion, singing bowls, didgeridoo, angelic vocals, soundscapes and nature sounds. Length: 53 minutes.

Amoraea Dreamseed receives various commissions from the Divine to construct sacred architecture of the subtle realms here on Earth in ways that become accessible temples for people to recommence and reinforce their connection with Source Presence. Exploring multiple mediums to express and transmit the one cosmic code in to form, Amoraea has created various ceremonies, spiritual images, sound holograms, activation seminars, and healing chambers as access points for others to awaken from within.

After numerous catalytic in-breaths of receiving Multi-Dimensional Information and Upgrades during college (where he majored in Transpersonal Psychology and Religious Studies), Dreamseed moved to Hawaii for the next seven years and refined his spiritual connection and the grand synthesis of the work to be delivered. Awakening of his Antahkarana ("Rainbow Bridge Godhead Axis”) and the hyperluminal physics of the Soul inevitably delivered him to his true purpose as an emanation and embodiment of the Divine for collective awakening.

Sacred Stargate Global Site work became a major point of implementing and re-weaving light codes in the matrix of the Earth, especially in Peru, Mayan country, India, Nepal, Bali, Avalon, and Egypt. Personal and group ceremonies engaging the ascension of consciousness with others in the "light family” revealed the inherent design of how Source Intelligence is utilizing those of us now in the waking status to accelerate the cosmic program. Inherent in Amoraea’s template is an experiential ability to translate the sacred geometries, light-sound code matrices, spiral breath sequences, body mudra harmonics, and quantum time holograms into a unifying hyperfield mechanics that open multi-dimensional portals for accessing our MetaSelves. He delights in co-creating and sharing this scintillating field with other waking ones, physical and otherwise. Sacred union with others in Soul Tantra/Meditation became one of the quickest and integrated ways of advancing the Soul Kundalini Lightbody and Cosmic Consciousness. His archetypal work in sacred expression, whether with intimate partners or intimate SoulPod family that greatly influences his art, music, and teachings.

Amoraea is dedicated to unifying the transcendent and immanent aspects of the Godhead into the fulfillment of the Divine human potential as fully awakened source embodiments. Anything he can do to assist in the empowered realization within others brings him supreme bliss and joy!

Amoraea currently resides in the violet-white capstone of Mount Shasta, at the "Temple of Illumination,” but is dedicated to traveling on the road half the year facilitating his seminars and ceremonies, and prayer-forming sacred site work across the planet.