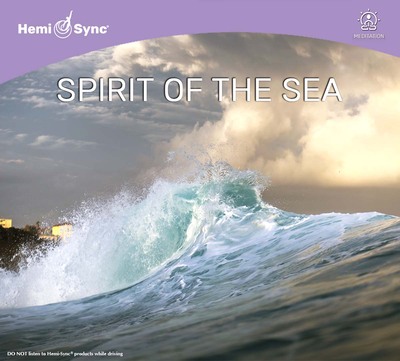 Spirit of the Sea

Spirit of the Sea

Strengthen and deepen your inner connections, expand your understanding of yourself, and access the wisdom of collective memory.

David Helpling’s pure ambient electric guitar music is directly influenced by the creative, destructive, and life-sustaining forces of the ocean. Like the sea, your spiritual Self is a self-nourishing and self-destructing network, and what is seeded there will manifest in your life. In the depths of the soul is where your peace and wisdom, creativity, fears and doubts live. The addition of Hemi-Sync® makes Spirit of the Sea a great tool to use in meditation.  Length: 59 minutes
Executive producer Garrett Stevens. Engineered and mastered by Rob Dobson.

Even at an early age, David Helpling was an inquisitive spirit, a kid with a wild imagination who was always looking under stones for bugs and frogs and things. Now, David roams a musical landscape, exploring different textures and unearthing various moods, and it is that same curiosity that makes his music so stunning and unique.

A self-taught musician, David’s ability to “feel” the music has resulted in two captivating albums that showcase His atmospheric depth as well as his rhythmic sensibility. His debut release, Between Green And Blue, was a finalist for the 1997 INDIE Album-Of-The-Year, and is already considered a favorite among listeners to this genre. On his second release, Sleeping On The Edge Of The World, Helpling takes his unmistakable style and dense sound sculptures to a deeper level.

As a full-time composer, David has written music for several successful feature films. One of which, Trade Offs, had David immersed in the music of India. Featuring several guest artists including vocalist Nidhi Bhatmuley, this score has become a favorite world-wide. “David Helpling’s score for Trade Offs is a lovely and accomplished east-west fusion” – Mychael Danna.

Among other musical influences such as U2 and Bjork, one of David’s main inspirations is film music. The dark and moving scores of Elliot Goldenthal, Edward Shearmur and David Julyan are just a few of his favorites, and it would seem that David has a constantly running soundtrack of his own as well. “Music is always in my head. That’s how I write. I’m always dreaming.”

Copyright © 2022 by Interstate Industries, Inc. d/b/a Hemi-Sync®
Hemi-Sync.com®
Be the first to review “Spirit of the Sea” Cancel reply