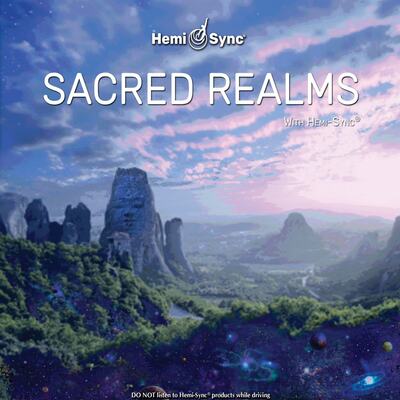 This inspiring musical soundtrack blends essential elements of earth and sky with Hemi-Sync® frequencies, aiding in the progression of a deeper state of consciousness. Michel uses a variety of computer software and electronic keyboards to create an exquisite tapestry of music and sounds, providing a truly unique listening experience. Length: 57 minutes.

“This new release, Sacred Realms, is a quite exotic Visionary foray through some gorgeous inner paradises. Returning with grandeur to the more narrative rhythmic form of music reminiscent of his collaboration with Anton Mizerak, Genest has created a beautiful work of art which, with the support of the well done brainwave matrix, takes the listener to deep gardens of spectacular yet delicate splendor.

After so many years of querying and finding nothing new, it is a great pleasure to me to acquire this album and experience how the artist has grown and developed over these years. That it is a work of such depth as to guarantee discoveries on many subsequent listens has me pleased and a bit effusive. I wish I could say something critical, for balance (you understand,) but can’t think of anything.”   —Darv Krizton, Visionary Sound Arts Interface (read full review here:  https://darvkrizton.com/darvreviews)

Michel Genest is a creator of uplifting and soothing music, which enhances and redefines the listening environment. Through the blending of unusual sounds, styles and techniques, the listener is offered a unique audio sensory experience.

Michel Genest was with the Narada label (now an EMI/Capital imprint) for several years. He emerged with his first electronic space album, Crystal Fantasy. This title was very popular and received international acclaim and recognition. In addition, Michel has also released other titles such as Riddle of the Sphinx, Ascension, Harmonic 33, Angels in Our Midst, and Lift Your Spirits (an album created especially for Hallmark.)

Angels in Our Midst CD was also provided as an inclusion to a gift book of the same title. Distribution and publishing of this material is by Peter Pauper Press. Michel’s music has also appeared on a gift CD included with a new book A Simple Guide to Yoga, also by Peter Pauper Press. So far over 100,000 copies of both titles have sold.

Accomplishments include Michel’s music title Metamorphosis used in a 2007 Belgium film documentary Vergaan in de Noordzee. In addition, his music has been extensively aired on TV and radio programs domestically and internationally. Recently aired foreign programs were in Belgium, Denmark, and Slovenia. In the U.S., his music has been featured on NPR (National Public Radio), PBS (Public Broadcasting Stations), and Internet Radio.

As a professional recording artist with over twenty years of experience, Michel considers himself well versed in all the creative and technical aspects that are related to the music and recording industry.

The musical journey of Michel Genest serves as an eloquent vehicle for a populace seeking inner reflection and relaxation, much needed in today’s overwhelming stressful world.

To listen to more of the music of Michel Genest, go to iTunes or other fine online music stores.