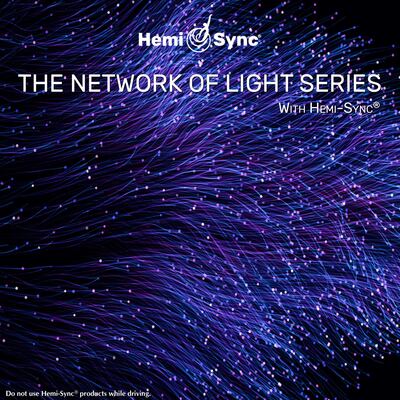 Four exercises in the Network of Light series use a progressive relaxation technique, along with Hemi-Sync® audio signals to gently guide you into a deep, receptive state of relaxation.

As a pioneer in the field of alternative medicine, Dr. C. Norman Shealy has helped medical practitioners to understand more fully the power of the mind-body connection and its relationship to maintaining wellness, or restoring wellness following a trauma such as surgery or a life-threatening disease. Each of the four exercises in the collaborative Network of Light series has been voiced by Dr. Shealy. These exercises use a progressive relaxation technique, along with Hemi-Sync® audio signals to gently guide you into a deep, receptive state of relaxation. You will use this receptive state of relaxation as a “switch” to turn on your inner network of light. A Guidance Manual and four exercises are included: Mind and Emotions, Endocrine System, Immune System, and Nervous System.

Another title by Dr. C. Norman Shealy is Hemi-Sync® Relaxation.

By the time he was 4 years old, C. Norman Shealy knew he wanted to be a physician. Just how far down the road that would take him, he could never have imagined at that time. Now, Dr. Shealy's ideas have been the foundation for pain management therapies used worldwide, and the ''Shealy Program'' is the mainstay of chronic pain treatment and management sought by patients and physicians alike.

Shortly after graduating from Duke Medical School, and beginning his career as an accomplished neurosurgeon, Dr. Shealy noted: ''The most common symptom in the world is pain, and yet nobody specializes in it.'' At this early phase of his medical life, he decided to look into pain, what causes it, what we can do about it, and how it affects us as human beings.

He had not been investigating long before he recognized that the majority of long term fixes for chronic pain did not come from the established medical community, but from the ''folk domain.'' Shealy began a series of research and experimental processes which included any ideas he could come across that claimed to be able to treat chronic pain in the long term without the use of narcotic medications. Consulting and researching with acupuncturists, mystics, faith healers, color therapists, folk healers, and other non-traditional therapists, and blending this new knowledge with his medical background, Dr. Shealy came to the conclusion that, while none of these methods was THE cure for chronic pain, almost all of them had developed a documented history of being able to successfully eliminate chronic pain in a good number of their attempts. It is at this juncture that he decided that ''It is the interaction of the four main fields of stress; the chemical, physical, electromagnetic, and emotional; that is the cause of all illness...not some, all.''

Now, Shealy embarked on a lifelong quest to find ways to manage successfully chronic pain. He opened his first pain management clinic in La Crosse, Wisconsin and developed a long series of successes in treating patients who had been otherwise untreatable. During this period, he developed a device called the dorsal column stimulator, which uses small electrical currents to adjust the electromagnetic fields within the spinal column. The stimulator was so successful in treating previously untreatable chronic back pain that it has become a favored treatment for pain by physicians world-wide. The breakthroughs generated by the dorsal column stimulator contributed directly to the development and patenting of the TENS system of electrical stimulation, a pain treatment regimen now in demand throughout the medical community.

The cost-effectiveness of Shealy's treatments for back pain have led to a series of breakthroughs culminating in the discovery of urgently low levels of a chemical known as DHEA in almost all patients suffering chronic pain. Shealy's further research developed a procedure that could effectively raise these DHEA levels in humans, without the use of medications, and his studies documented the cessation of this chronic pain in almost all subjects studied. His now patented system for curing chronic pain is used by traditional and non-traditional practitioners in nearly every specialty today.

While conducting all of this research, Dr. Shealy noted an abnormally large group of patients he was treating for chronic pain were also clinically depressed. Wondering if there was some connection between this chronic pain and their clinical depression, he sought and gained a Ph.D. in psychology. Further study did show, in fact, that with or without chronic pain, depressed persons also showed a low level of DHEA, and so he began a course of highly successful treatment of chronic clinical depression, again by naturally raising the patients DHEA levels without the use of drugs or medications. Current studies are underway by Shealy and many others to try to determine to what extent other illnesses may or may not be associated with abnormal DHEA levels, and may be treated non-pharmacologically, by adjusting those levels therapeutically.

In 1999, Dr. Shealy retired from actively seeing patients, and spends his time now dedicated to further research and teaching. Having begun his career by alternative forms of treatment for patients, he now desires, through research, teaching, and writing, to blend what he and others have learned via his discoveries with the more traditional approaches to medicine, allowing his approaches to benefit patients in all medical specialties.

Norm and his wife of 40 years, Mary-Charlotte, live in Missouri, where Chardy is also known world-wide for her Success-Centered Riding and Training. When Norm and Chardy aren't ''horsing around'', they enjoy visits from their three children; Brock, an attorney in Kansas City and Atlanta; Craig, a clinical psychologist teaching in Virginia; and Laurel, an attorney in Springfield, MO. They also dote on their five grandchildren.

C. Norman Shealy entered Duke University at age 16 and Duke Medical School at 19. He was elected to both Phi Beta Kappa and Alpha Omega Alpha honor societies and became the permanent class officer of his graduating medical school class. He interned in Internal Medicine at Duke and then had a year of General Surgery at Banes Hospital, followed by a five year residency in Neurosurgery at Harvard’s Massachusetts General Hospital. He is Board Certified in Neurological Surgery. In 1961 he spent 9 months working with Sir John Eccles, Nobel Laureate, at the Australian National University. In 1977 he earned a Ph.D. in Psychology from Saybrook Institute, the leading Humanistic Psychology school. And he received a Doctor of Science degree from Ryodoraku Institute.

He then spent 3½ years at Western Reserve Medical School, where his research led to both Dorsal Column Stimulation and Transcutaneous Electrical Nerve Stimulation (TENS™), both now used worldwide to help control pain. In 1966 he became Chief of Neurosciences at Gundersen Clinic, one of the 10 largest clinics in the U.S. In 1971 he founded the first comprehensive pain and stress management clinic in the world. The Shealy Institute was recognized for several years as the most successful and most cost effective pain clinic in the U.S. Over a 30 year period his clinic treated over 30,000 chronically ill patients with a remarkable 85% success rate.

His other contributions include:

He has appeared on numerous national TV programs, including The Tomorrow Show, The Joan Rivers program, Geraldo, Good Morning America, the Today Show, Oprah, the Wisdom Channel, and scores of regional and local television and radio programs. For 20 years he has had the most popular call-in radio show in the Ozarks on KWTO, 560 AM. He publishes a free weekly e-newsletter.

Since 1971 he has lectured worldwide at hundreds of medical schools, universities, hospitals and churches, with up to 100 appearances each year.