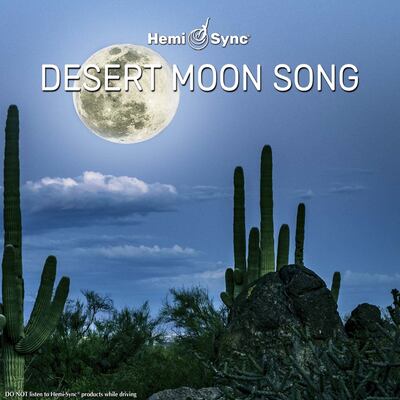 A “classic” homage by Dean Evenson to the sacred and purifying energies of the desert.

Desert Moon Song is one of the first ambient recordings to pay tribute to the desert. Native and silver flutes echo the distant call of coyotes. Harps and synthesizers evoke images of spacious landscapes creating a sense of mystery and inner calm. This delicious melding of instrumental and natural sounds completes the healing cycle at dusk with a chorus of mating frogs. The Indian rain chant is by Hopi elder Grandfather David Monoyne. Instruments featured: silver and native flutes, harp, guitar, synthesizer, percussion and nature sounds. Length: 55 minutes.

Dean Evenson is one of the true visionaries of the Ambient/New Age musical genre—a prolific musician and composer, an entrepreneur, media pioneer and the co-founder of Billboard-charting independent music label, Soundings of the Planet. At every turn, Evenson's life has taken bold steps in new and exciting directions. The success and pioneering nature of his creative work attest to a dynamic personality and a life-long commitment to the positive evolution of life on this planet in relationship with the natural and spiritual world. Evenson's story is that of an artist, technological innovator, broad-minded thinker—a modern-day Renaissance man.

A Childhood in Music and Nature
Music, nature and spirituality were a part of Evenson's life from a very early age. Growing up in Staten Island, New York as part of a musical, church-going family, Dean learned to play flute and piano, and played and sang in all types of school, church and community orchestras, bands and choirs. His affinity for music also found expression in a deep, abiding love of nature. Borrowing his elder brother's recording equipment, Dean would often place a microphone outside his bedroom window to capture the crash of thunderstorms. While on an early bird-watching trip with the pastor of his church, Dean learned to appreciate the wonderful, musical complexity of bird-songs. "You don't notice those things when you're young unless they're pointed out to you," reflects Dean. "Hearing them for the first time like that changed my whole perspective on what nature was and what I thought about sound." From that point on, music, nature and spirituality became the primary threads with which Evenson wove the fabric of his life.

A Scientist's Questions
His interest in nature and a keen analytical mind initially took him into the sciences, where he pursued a Master's degree in molecular biology under a National Science Foundation Fellowship at the University of Maine. At some point during graduate school, however, he realized that he was devoting much of his time to art and music projects on the side. When he completed his degree, his life took a dramatic turn in that direction. "I realized that I had gone into science to find out what science knew about life, but I was never looking for a career," Dean explains. "I was entranced with determining what it takes for us to live as better human beings on this planet." The same quest for spiritual knowledge that brought him to science propelled him toward the arts.

The New York Recording Scene
After graduate school in 1968, Dean moved to New York's thriving East Village arts district, "to see what would happen," as he puts it. Two important things happened right away. He moved into an apartment directly across from Dudley Dickinson, who soon became his wife and lifelong artistic and business partner. Dean also immediately found work as a recording engineer at Regent Sound Studios where he worked on albums by Eric Clapton, Les McCann and Roberta Flack.

An Emerging Technology
At the same time, Dean became intrigued with emerging video technology. For sharing ideas of peace and spiritual evolution, Evenson reasoned that the visual image is as powerful a sensory medium as audio, so he and Dudley took a risk and bought one of the first Sony portable cameras long before VCR players were available to the public. They went on the road in a converted school bus to record the alternative culture and awakening consciousness of the era.

Documenting An Era
Exploring their newfound artistic and documentary medium, Dean and Dudley became engaged in some of the defining social and popular cultural moments of the '70s and '80s. They produced multi-media support for a Sam Shepard play at Lincoln Center, videotaped Jefferson Airplane's live tribute to Janis Joplin in San Francisco the night after she died, and taped the First United Nations Conference on the Human Environment in Stockholm in 1972. They lent audio and video recording support to the American Indian Movement during the occupation at Wounded Knee, South Dakota, and became profoundly inspired by Native American reverence for the living earth. An audio-video production developed out of participating in the 1992 Earth Summit in Brazil, with interviews of Vice President Al Gore, Bianca Jagger, the Dalai Lama and others. At the conference, Dean performed with John Denver, fellow New Age pioneer Paul Winter, and then with Gwich'in tribal leader Sarah James before an audience of 50,000.

Founding The Music Label
After many years of living the life of nomadic video pioneers, Dean and Dudley finally settled for a time atop 10,000-foot Mount Lemmon, just outside Tucson, Arizona. They founded their own music label, Soundings of the Planet in 1979, and began selling homemade tapes at swap meets and health food stores to fulfill their vision of "Peace Through Music," which became the company motto. Their beautiful, peaceful music often incorporated recordings of natural sounds--streams, bird-songs, wind, ocean waves—and the young company began to define the emerging New Age musical genre.

Musical Achievements
After years of organic growth, Soundings of the Planet has become a tremendous success, producing seven consecutive Billboard-charting albums, and being selected as a Billboard Top 10 Indie Label three years in a row. Dean himself has produced over 10 albums of his own music, including Billboard-charting Forest Rain, Desert Moon Song, Ocean Dreams, and Wind Dancer (with keyboardist Tom Barabas). Evenson's music has been selected for film scores, including the soundtrack to the PBS mini-series, "The Way West," and Disney's "Jungle Book" preview. The Windham Hill music label included Dean's music on Path, its recent ambient music sampler. In addition, Evenson further combines his technical skills with artistic creativity, pursuing state-of-the-art music and multimedia productions, and by directing, producing and recording numerous albums by other Soundings Ensemble musicians—including vocalist Lorellei, whose collaboration with Dean marks a dynamic, new development for both artists. Evenson is renowned as a virtuoso composer, flautist and synthesizer artist, and uses his position in the music industry to promote environmental awareness, social justice and responsible business practices.

The Ongoing Vision
Dean's life has taken many unexpected twists and has led him and his family through many remarkable, ground-breaking experiences. The same philosophy that led to their unpredictable success and vitality in the past is what continues to guide him. Dean explains, "I've always wanted to do the best thing for the planet and what I do is in service. I don't have a lot of projections about what I'm supposed to be doing or where I should be going. I just follow my inner purpose and personal vision. It's the intuition, the learning, the inner knowing of which way to go that is the important pathmark for us." Maintaining that devotion to inner vision and the positive evolution of the planet in the '90s continues to guide Dean and Dudley Evenson and their growing music label.