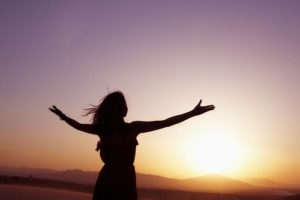 Growing up I was one of those super ambitious types. If I set my eyes on something I wanted, you better believe I was going to get it.

I used to think I was just lucky. My friends would tell you I was determined. My parents coined me the “go-getter” child.  The truth is I was a power manifestor before I even knew what the word meant.

As children, we’re innocent so we believe we can do almost anything. We don’t typically hit a roadblock until someone outside of ourselves tells us that we can’t do something. Or labels what we want as “stupid” or a “pipe dream”.

But those kids who grew up in environments like mine, where we were told if you think it you can become it, and that you can have anything you set your mind on having, we were unknowingly being taught the power of manifesting!

Be careful though. That means we can manifest the stuff we don’t want either. Case in point:

We all use our past as an indicator for how the future will unfold. Nowhere is this more prevalent than in relationships. We say we want a certain thing, and then find ourselves attracting the exact opposite.

Why do we do that?  Because we’re putting all of our focus on what we don’t have and what we don’t want.  And wherever our attention goes, energy flows.

Manifesting what you want isn’t as hard as you think. It just requires some small shifts in your thoughts and belief systems while adding some creativity and magic to the mix!

These are the 5 most effective and powerful tools to manifesting what you want, whether it be more money, a new job, a relationship or even a vacation you’ve been dying to take:

VISUALIZE. If you can’t see yourself actually having something, it won’t materialize.  That doesn’t mean you won’t occasionally find yourself in situations where you say, “OMG, I could have never imagined this would happen for me!”  It just means there is power in “seeing” what you desire in your mind and the ability to call it forth.

This is why Vision boarding has become so popular. Grab some magazines, cut pictures, words and phrases out that embody what you want to manifest and put it on a poster board or place it where you can see it every day.  I use my refrigerator as my vision board and have managed to call in 95% of what I’ve put up there over the years. (Guess I wasn’t meant to live in that mansion on the beach!)

SPEAK IT INTO EXISTENCE. We become what we believe about ourselves so choose how you talk about yourself and your circumstances carefully.  For example, when you find yourself in a situation that isn’t ideal rather than saying, “I hate my job,” or “My life never goes the way I want,” switch that to “My job is challenging right now but this is all going to shift to what I want soon,” or “Things haven’t been happening in the time I thought they would, but I KNOW it’s coming.”

GIVE ENERGY TO WHAT YOU WANT. Put thought, time and energy only in what you want, not what you don’t. As I said, energy flows where our attention goes.  When I want to write an article, I close my eyes and imagine exactly what I want that piece to say and for readers to get out of it and then I write.  If you want to lose weight or be healthier, put your energy into meal planning and working out, not looking in the mirror putting yourself down, lamenting you’ll never fit into those skinny jeans again.

GIVE GRATITUDE. Being grateful for what you already have brings more of it in. Focus on the abundance, not the lack.  The Universe doesn’t work in our time, it works in Divine timing.  Give thanks in advance for what you want, knowing you’re going to receive it.

PRAYER & MEDITATION. You don’t have to believe in prayer but meditation is a form of prayer and you don’t have to be religious to do it.  Meditation is a powerful way to call in what you want. During my meditation, I picture what I want to happen as if it has already happened. I see myself having already achieved my goal. I feel the feeling as if I’ve already accomplished what I want.

Remember, if you don’t see things happen right away, it doesn’t mean it’s not working.  Keep at it and trust in the timing. Then watch the magic happen.

Hemi-Sync Podcast Episode 14: Bernardo Kastrup on Why Materialism is Nonsense