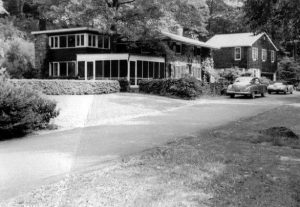 Some of my fondest memories take place at our home, River Knoll, in Croton-on-the-Hudson, New York. I was four years old when we moved there. Our family then consisted of Daddy (Bob), Mother (Mary), sister Laurie, myself and our Siamese cat, Smokey. Our home was idyllic, replete with fields, woods and gardens overlooking the Croton River.

It was at one time a hunting lodge and was fort-like with its stone construction. There was a swimming pool that Daddy kept half full until Laurie and I became proficient swimmers. He commuted to the city by train, as many New Yorkers did, and Laurie and I looked forward to his coming home and jumping in with us. Bob, always on the cutting edge, even installed underwater speakers and colored lights that greatly enhanced pool parties by night.

We spent much time together as a family. It was a happy, optimistic time. My mother, once an actress and singer, was happy to have two daughters to raise. When Bob came home in the evening we all sat down to dinner at around 7:30, after Laurie and I had finished our homework. I remember many conversations about the importance of learning and being the best that we could be. We were encouraged to do well in school so that we could attend college.

My sister and I were among the first “guinea pigs” to experience Bob’s first sleep-learning tapes. As for their efficacy, well, we received excellent grades in school! One summer our learning project was to memorize the multiplication tables from 13 to 20. I also remember one Christmas when we received a huge Webster’s Dictionary with the assignment to learn five new words a day!

Although education was a large part of our lives, we actually had fun together. We engaged in the typical activities of mid-century families. We took road trips in our pink-and-white Chrysler Imperial (Mother’s choice) taking advantage of the bourgeoning Holiday Inn industry along the way.

With Bob as vice president of Mutual Broadcasting Production Division, we were fortunate to acquire a color television when they first became available. It was an event to watch programs together, such as Walt Disney, Gunsmoke, Perry Mason, Perry Como and Leave it to Beaver, to name a few. We had family picnics and went into the city for the theater and museums.

Music played a large part in our environment. My sister and I both played piano. Bob had engineered a “music wall” in our living room consisting of reel-to-reel players, amplifiers and turntables. Hidden speakers piped music throughout the house as well as outside. Because of a part-ownership of radio stations in North Carolina, demo records arrived weekly and we listened to Christian, classical, pop, Latin American, opera and jazz.

With two exuberant and adoring little girls in tow, Bob needed his quiet time. Whenever possible he would retreat to his “cabin in the woods” for several hours. We knew not to disturb him there. It was a cozy one-room cottage with a bed, sofa, chairs and desk with typewriter. Here he would regroup and work on his many compositions, both musical and literary.

These times were a bit troubling for Daddy, as he was just beginning to have his out-of-body experiences, and they frightened him as referenced in his book Journeys Out Of The Body. I became aware of this much later. In retrospect, I can only remember consistency and normalcy. My life with Bob was filled with love, encouragement and support.

Living from the Heart 2