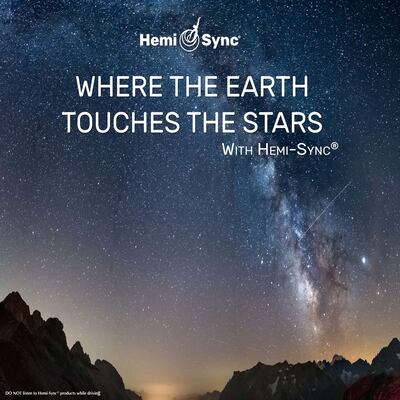 Where the Earth Touches the Stars with Hemi-Sync®

Where the Earth Touches the Stars with Hemi-Sync®

Relax to a calming blend of Native American and celestial music embedded with Hemi-Sync®.

Celestial soundscapes musician Gerald Jay Markoe performs with Native American flutist, A. Brent Chase to create music that is grounded in the earth yet connected to the stars. This delightful composition evokes the magic and mystery of a starlit night in the desert—the awe and wonder of nature and the cosmos. It inspires a sense of harmony and unity of earth with the universe. Instruments featured: Native flutes and synthesizers. Length: 47 minutes.

Another Metamusic® title by Gerald Jay Markoe is Star Spirits.

Since the early 1960s, Markoe has studied meditation and astrology, and he specialized in translating the positions of the planets into music, often recording custom tapes based on a person's astrological sign. His first public album in 1988 was Music from the Pleiades, inspired by the famous poster of the constellation. Markoe formed his own music company, AstroMusic, to distribute his album, and Music from the Pleiades quickly became a bestseller in the New Age market. (Indeed, at least one Markoe album always ranks among the top sellers in the New Age market.)

Markoe continued a series of Pleiades-inspired albums until 1993, when angels became the craze; his many angel albums showcase his sensitivity for Baroque music, walking a fine line between orchestral replication and spiritual embellishment. In 1995, he reached out to Native American "brothers" to record/produce albums with Cuzco medicine man Wachan Bajiyoperak (Inka Sunrise), Navajo flautist Brent Chase (Where the Earth Touches the Stars), and the Four Mountain Nation Singers (Navajo Chants). Markoe has also recorded music to back meditation albums narrated by Alma Daniel and Stacey Dean.

Copyright © 2022 by Interstate Industries, Inc. d/b/a Hemi-Sync®
Hemi-Sync.com®
Be the first to review “Where the Earth Touches the Stars with Hemi-Sync®” Cancel reply