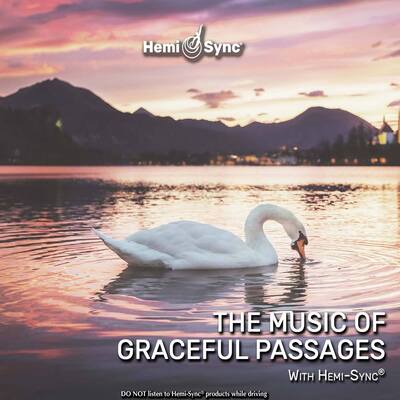 From the best-selling CD-book Graceful Passages, this music by Gary Malkin will immerse you in your own private refuge of tranquility and reflection. The music was originally inspired by authentic spoken messages from many of the world’s spiritual and humanitarian leaders; each spoke from a state of unconditional love, compassion, and a sense of Oneness with Source.  As a result, when listening to this music, allow it to open your heart and offer healing for any wounds that might still remain. Since we’re often most vulnerable during times of loss or change, experience this listening meditation as you traverse any significant transition in your life, so that you can remember who you are, live with an awareness of what matters most, and remember that you’re never alone. The Hemi-Sync® frequencies will deepen this experience, carrying you to a profound state of relaxation, allowing for calm and deep awareness of the beauty of life. Length: 74 minutes.

Gary Malkin is a multiple Emmy, CLIO, and ASCAP award-winning composer, producer and recording artist. He is dedicated to making a difference in the world by creating music-driven media and events that inspire the heart and catalyze individual and social healing. He is a dynamic public speaker who passionately embodies the vital role music, media, and the arts must serve as a way to integrate greater emotional and spiritual intelligence throughout our world’s institutions. Through his public engagements, he serves corporations, healthcare and faith communities addressing themes such as Using Our Creativity for a More Holistic World, Living a Life that Matters, Accepting What Is, The Healing Power of Music, and Deepening Our Listening, Deepening our Lives.

Gary is the co-creator of the internationally acclaimed book and CD set, Graceful Passages: A Companion for Living and Dying, produced by his life-enhancing media production company, Wisdom of the World. Wisdom of the World is dedicated to producing innovative media resources that will provide music-infused experiences of spoken messages from the world’s known and unknown visionaries so that we might live our lives with more mindfulness and compassion. He is the founder, along with co-author Michael Stillwater, of a non-profit organization, Companion Arts, dedicated to addressing the rampant “burn out” in the caregiver community, while integrating the values of a tolerant spirituality into our health care systems through provider-focused educational programs and resources called Care for the Journey.

In June of 2005, he and Stillwater received the first annual Elisabeth Kübler-Ross Award for significant contribution to the field of End of Life, sharing the award with internationally known speakers and authors, Frank Ostaseski of the Meta Institute, and Joan Halifax of the Upaya Institute, both nationally respected educational institutions for end of life professionals.

He has given keynotes, presentations, and performances for the Harvard Medical School/George Washington Institute for Spirituality and Health, Conference on Spirituality and Health; Healing Journeys: Cancer as a Turning Point Conferences; Scripps Clinic, National Hospice and Palliative Care Association, Association for Professional Chaplains, Casa De La Luz Hospice, The British Columbia Hospice and Palliative Care Association, Institute for Noetic Sciences, The Center for Integrative Medicine, as well as the Sunstone Cancer Center, among many others. He is a contributing author to the recently released Oxford University Press compilation edited by Dr. Christina Puchalski, entitled, A Time for Listening and Caring: Spirituality at the End of Life, an essay on the healing power of music as a catalyst for greater meaning during the end of life process.

Gary is proud to have served as the Artistic Director for a number of global events, such as the ’04 and ‘06 Quest for Global Healing Conferences, featuring Archbishop Desmond Tutu and other Nobel Laureates, in Bali, Indonesia. He was asked to serve as Artistic Director for the Noetic Sciences International Conference on Health and Consciousness, weaving relevant arts performances throughout. In 2006 at San Francisco’s Grace Cathedral, Gary was the producer of a breathtaking Middle Eastern peace concert, Music Heals, to a capacity audience, gathering together multi-faith musicians from all over the embattled region. For all of these events his role was to revitalize the role the performing arts could play within a conference setting that gathered around a particular theme, dramatically deepening the involvement of the participants.

In May of 2008, Chris Anderson, the Curator of the TED Conference, commissioned Gary to compose the theme package for the four-hour global broadcast phenomenon, PANGEA DAY, which aired socially beneficial, international films on six continents simultaneously. Featured on Chinese national television during the 2008 Beijing Olympics, he was the only American featured performer on the stage of the Great Hall of China as part of an annual cultural festival where he was introduced as a pioneer in the field of music, media, and healing. He also recently served as the Artistic Director for the WiseUSA initiative, a global online event dedicated to promoting a more conscious approach to the 2008 American electoral process, through Gaiafield.net.

Throughout his 30-year career, he has worked on hundreds of socially responsible documentaries and environmental media projects.  The ultimate expression of his commitment to creating music for socially beneficial media has been to be a part of the media team for the global educational project, the Pachamama Alliance’s Awakening the Dreamer, Changing the Dream symposium, (founded by Lynne and Bill Twist). As a part of this team, he composed all the music for this groundbreaking educational program, dedicated to empowering people to take greater responsibility for the planet’s ecological and spiritual well-being.

After many years of exploring the power of combining music with spoken wisdom, he and his Wisdom of the World team are now working on new ways in which contemporary digital media can provide an ”innertaining” format for healing and life enhancement, featuring the world’s “wisdom keepers”, awakened with the power of music and imagery. Through his performances, presentations and recordings, he is committed to promoting a greater understanding of the power of music and the media arts as a potential source of healing and integration of body, mind, spirit and heart.