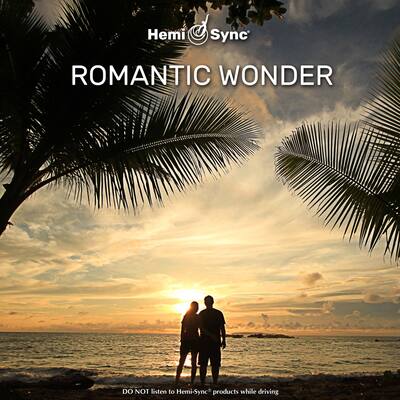 Create a dreamy mood for those special moments with the romantic music of Don Paris and Ilona Selke combined with Hemi-Sync®.

The passionate and emotionally engaging music of Romantic Wonder will speak to your soul. The haunting sounds of flute, guitar, and cello artfully convey every nuance of the tender and loving feelings expressed in this amorous composition. (50 min.);

Another Metamusic® title by Ilona Selke is Himalayan Soul.

Ilona Selke is an international author, seminar leader, lecturer, and musician. She has inspired thousands of people to co-create reality, to discover the power of a spiritual mind, in a practical way, and to live and manifest their dreams. Ilona teaches seminars regularly in Germany, Switzerland, Florida, Bali and Hawaii in German and English. She has taught in America, Australia, India, England, France, Canada, Mexico, and Singapore.

Ilona Selke's first name means radiant and her family name can be traced to the Celtic myth about selkies, sea-dwelling mammals, usually a seal but sometimes a dolphin, capable of shape shifting into a human. In one legend a selkie changes into a beautiful woman and has children with a man. Their children were able to see into the future and communicate telepathically with animals. One wonders then at Ilona's own history and calling. In Australian aborigine mysticism it is believed that one is one's name. For Ilona Selke this certainly seems very close to the truth.

Ilona Selke was born in the Himalayas and raised the first three years in Afghanistan speaking Persian and then raised in Germany. She moved to the U.S. at age 20 for her studies in philosophy when she met her husband Don Paris, Ph.D.

She continued in her studies of body-centered psychotherapy, Hakomi, Holodynamics, Radionics and alternative healing when they moved to Boulder Colorado, and later to their home in the Pacific Northwest.

Ilona and her husband are co-founders and directors of Living From Vision®, an institute for personal growth, multi-dimensional development of awareness, and spiritual relationships. Together they train teachers for the course “Living from Vision®,” now translated into four languages, which is being taught worldwide. They divided their time between their island homes, one in the Pacific Northwest and the others in Hawaii and Bali.

Since 1991 Ilona Selke and Don Paris have studied the lives of dolphins in their natural habitats throughout the world. Through their natural skills, dolphins exchanged telepathic messages with her that formed the basis for her book, Journey to the Center of Creation, and her third book Yoga of the Soul. Both books tell us about inspiring adventures about dolphins and their key message to humanity: using our imagination to build a better world.

Ilona has been loved for her inspiration and practical solutions to spiritualizing one’s life and has appeared on TV and in radio interviews worldwide. She has been a favorite speaker at the Prophet’s Conferences. Her books are in print in four languages.

Don Paris began his musical career at age 9 when he formed a rock band. Their first performance was for his 6th grade class. The band was called Freeflite and stayed together for the next 12 years and became one of the top bands in the midwest (http://www.freeflite.org) His fascination with the Spirit worlds and out of body experience was ultimately what moved him from the world of Rock into meditation music.

After the band he went back to college and studied classical guitar, piano and voice. He studied recording engineering at National Recording Studios in Baltimore, Maryland and began recording his own original music. He met Ilona Selke in Baltimore and after they married they began producing CDs together.

Don's main work began to center around healing and radionics and he became the world's foremost authority on the SE-5, a popular radionics unit. He did experiments combining radionics and music with fascinating healing results. (http://www.se-5.com ). He recieved an honorary Ph.D. from the Univeristy of Vitalogical Sciences in Stockholm Sweden in the year 2000 for his work in this field.