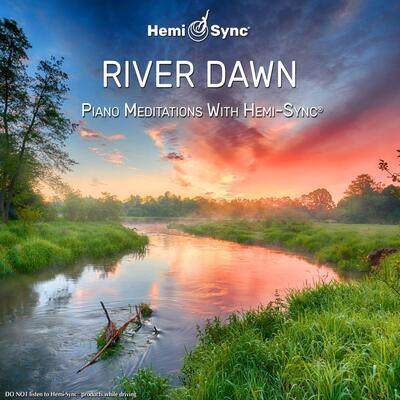 Intimate piano meditations to soothe and nurture the soul.

Experience the intimate piano meditations of Catherine Marie Charlton and Hemi-Sync®. River Dawn‘s amazing depth and heartfelt emotion convey an exquisite combination of strength and tenderness that soothes and nurtures the soul. Charlton’s artistic presence at the keyboard is intricately woven into her sensual and passionate performance as if it were intended just for you. Soft, but expressive, River Dawn is perfect for reducing stress and is an evocative sonic background for meditation. Instruments featured: solo piano. Length: 60 minutes.

Pianist and composer Catherine Marie Charlton has actively studied music since age 8, when she practiced so much her parents often had to ask her to stop. Since then, the classically trained pianist has performed in Europe and South America, and throughout the United States. Charlton played her commissioned work "A Dance for Argentina" at the United States Embassy in Buenos Aires, and was the featured artist at the Philadelphia Kimmel Center's First Anniversary Celebration. She performed at the 2004 NARM industry conference, whose roster of 34 artists included Chick Corea, Tears for Fears, and The Blind Boys of Alabama. Her appearance was one of 15 highlighted in Billboard magazine as a noteworthy conference act.

Charlton was recognized as a Finalist in the 2005 Independent Music Awards, and was named an Individual Artist Fellow three times by the Delaware Division of the Arts, for Solo Recital in 2004 and 2000, and Jazz Performance in 2002. She was a National Arts Laureate of the Tau Beta Pi Honor Society in 1994.

Charlton's four albums are broadcast throughout the world, including Soundscapes on Music Choice digital cable radio, XM Satellite radio's AudioVisions, and Public Radio International's Echoes. Her albums, The Undershore and River Dawn: Piano Meditations placed in the top of the worldwide instrumental music radio charts; in 2001 River Dawn debuted at #3 on the NAR charts, higher than new releases from Grammy winners Kitaro and George Winston. In earlier days of Apple Macintosh computers, you might have been one of the millions with her music on their desktop; she was the only living composer with an example sound file in the first release of QuickTime multimedia software.

She lives and gardens in Chester County, PA, with her husband and her two cats, Rosemary and Basil.