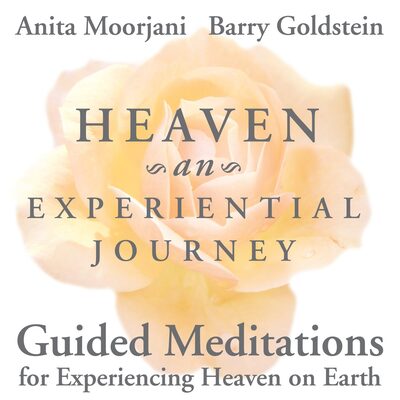 10 short meditations to help calm fears and bring mindfulness into a busy life.

Loosely based on the chapters of Anita Moorjani’s book, What if This is Heaven, these meditations offer a way of releasing stress and increasing self-awareness. Each track focuses on different areas of our self, such as health, self worth, fears, relationships and finding balance. These processes combined with the heavenly music of Barry Goldstein are the perfect vehicle to support healing and transformation in your life.

(This does not contain Hemi-Sync®)

If the doctors had been right, Anita Moorjani would not be alive today.

Now an international speaker and New York Times best-selling author, Anita had been given mere hours to live by her doctors on the morning of February 2, 2006. Unable to move and in a deep coma caused by the cancer that had ravaged her body for nearly four years, Anita entered another realm where she experienced great clarity and understanding about her life and purpose here on earth. In that realm, she was given a choice of whether to return to life or continue on into death. Anita chose to return to this life when she realized that heaven is a state, not a place. Because of this awareness, she made a remarkable and complete recovery within weeks of coming out of the coma. When she shared her story of healing and the insights she gained from her experience in the other realm, it went viral on the internet, receiving enormous interest internationally.

The 2012 book she wrote about her experience, Dying to Be Me (published by Hay House), hit the New York Times bestseller list within two weeks of its release, remaining there for nine weeks. Dying to Be Me also became number 1 in Canada and was in the top 20 on the Canadian book charts for six months. The book has since been translated into 45 languages and has sold over one million copies worldwide. It has also garnered the attention of several Hollywood producers to be made into a full-length feature film.

Anita's second book, What If This Is Heaven? (Published September 13, 2016 by Hay House), debunks 10 common cultural myths most of us have accepted without question that keep us from experiencing heaven on earth.

Anita's children's book Love: A Story About Who You Truly Are (Self-published on October 1, 2017), is co-authored and illustrated by children's book author Angie DeMuro. Within the pages of this beautifully written and illustrated book, children are taught how to have compassion and acceptance for themselves. And how to love themselves through many everyday situations.

Now completely cancer-free, Anita travels the globe, giving talks and workshops, as well as speaking at conferences and special events. She's been interviewed regularly on various prime-time television shows around the world, including CNN's Anderson Cooper 360°, The Dr. Oz Show, Fox News, The Jeff Probst Show, the National Geographic Channel, and The Today Show in the U.S., as well as The Pearl Report in Hong Kong, HeadStart with Karen Davila in the Philippines, and many others.

Born in Singapore of Indian parents, Anita lived in Hong Kong most of her life. From the age of two, she grew up speaking English, Cantonese, and an Indian dialect simultaneously. Before her cancer diagnosis and near-death experience, Anita worked in the corporate field for several years. She now resides in the United States.

What is Flying Man Records™