“I lay there in semidarkness and looked through the floor to ceiling windows at the night sky. Without willing it, I felt the familiar vibrations begin…I was just in the act of lifting out of the physical when I noticed something at the doorway. It was a white form the general size and shape of a person. The white form moved into the room…and passed within a foot of my side of the bed as it went into the bathroom. I could see that it was a woman of medium height, with dark straight hair and rather deep set eyes, not young, not old. She was in the bathroom only a few moments, then emerged and started around the bed again. I sat up-non-physically, I’m sure- and reached out to touch her, to see if I could. Seeing the motion, she stopped and looked at me. When she spoke, I could hear her quite clearly. I could see the windows and drapes behind her and through her. “What are you going to do about the painting?” It was a woman’s voice and I could see her lips move. Not knowing what to say, I tried to give a satisfactory answer. I said I would take care of it, don’t worry. With this she smiled slightly. Then she reached out with both her hands and took my hand in hers. The hands felt real, normally warm and alive. She gave my hand a little squeeze, gently dropped it and moved around the bed and out the door.” —Journeys Out Of the Body by Robert A. Monroe

In anticipation of a move to Virginia, we sold our home when an interested buyer came along. We rented a house for a year prior to our move. It was built on a pinnacle of rock overlooking the Croton River. The home was originally the Nikko Inn, built in 1907 by real estate developer Clifford Harmon as part of a plan to bring professional theater and film stars from New York City. It was a rustic Japanese teahouse and later a speakeasy. The house had a lot of history!

I can remember Bob buying a little jon boat with a 7.5 horsepower Mercury motor, and we would explore the river and small creeks. I felt quite grown up in the freedom of turning the power to full speed and cruising up and down the water with the wind blowing through my hair! I was all of 12 years old. Being a responsible 12-year-old, I had reached a rite of passage. It was determined that my sister, Laurie, and I would no longer need a babysitter when the parents went out for an evening. They often took the train into New York City on Saturday nights.

I can remember quite clearly one such evening. Laurie and I had watched our usual Saturday night shows; My Three Sons, with Fred Mac Murray, and Gunsmoke, with James Arness. This was circa 1960. We went up to bed, and I was almost asleep when I felt someone or something sit at the foot of my bed. Thinking that Laurie had snuck out of her bed and pounced on mine to scare me, I reached for the lamp, ready to blast her. When light flooded the room, I saw my sweet sister sound asleep in her bed, and a depression in the bedding at the foot of mine! Slowly, as if someone was rising, the surface rebounded. I can remember feeling cold but not really frightened. My cat was next to me, observing, but did not seem alarmed.

I recanted this event to Bob the next morning at breakfast. He chuckled in his usual way and told me about his experience referenced above. I believe this was the same lady and that she was just checking in on us during our parent’s absence. I always felt safe after that when we were alone in the house. 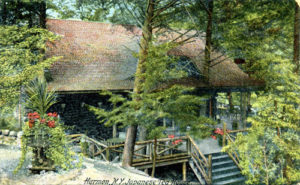